07 May Central States Shows Its Metal

After months in the building process, Allen County’s newest factory, Central States Manufacturing, held a ribbon cutting and open house Saturday before its first full day of production this past Monday, May 4.

“We want to welcome Central States Manufacturing to Scottsville,” Allen County Economic Development Director Richie Sanders said during Saturday’s ceremony, adding that the plant is the seventh in the Central chain and the first in Kentucky. (The company’s six other plants are located in Lowell Ark.; Cedar Hill, Texas; Jasper, Ala.; Mount Airy, N.C.; Michigan City, Ind.; and Hartford, S.D.)

“We believe, with our workforce here, you’ll do great things,” Sanders said.

“You’ve come a long way since we were out here with a county backhoe digging holes to test the soil,” Allen Judge/Executive Johnny Hobdy said. “We’re looking forward to working with you. This will be a great addition to our community.”

“You are a blessing to us in terms of bring jobs to good people,” State Rep. Wilson Stone (D-22nd District) said.

The $2 million plant has a full-time workforce of 10, members of which also enjoy partial company ownership upon employment. The officials were speaking to Plant Manager Kirby Ramsey and other company executives, including Director of Marketing Jim Dotson. 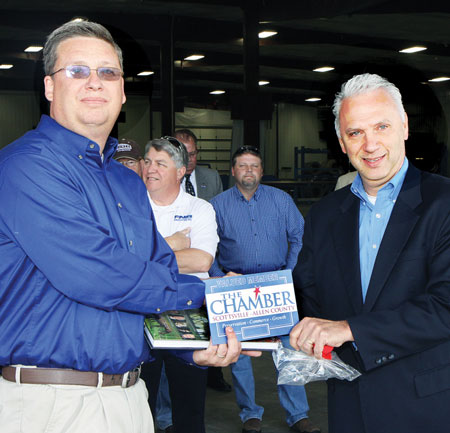 Ramsey noted that Central had looked at several counties in the region for a location. In addition to the prime location, Ramsey credited the Allen County-Scottsville Industrial Development Authority—and named Director Richie Sanders and assistant Pat Pfeiffer by name—in the company’s decision to locate here.

“When we met Richie and Pat, we new this was where we wanted to be,” he said. “The amount of support we received was unbelievable.”

Dotson and Ramsey provided The Citizen-Times with a tour that previous afternoon, when the plant was in production. Literally, metal comes into the 24,000 square-foot plant on a coil, and finished product comes out the other end.

“We make everything,” Dotson said. “Everything you need, we make here, or else we can ship it in overnight (from another Central plant) so we’ve got it.”

The Scottsville plant includes Metal Central, which not every Central facility has. Dotson said the company’s main focus is supplying its metal products distributors, so it doesn’t have Metal Central direct contractor sales in areas that are already served by its main distributors. However, none of those have a large presence in the 20-mile radius surrounding the Allen County plant, so the company added a Metal Central office to the Scottsville facility.

“In areas where there’s not enough distributors, or they’re not strong enough, we’ll work with contractors in the area,” he said.

He noted that the Scottsville plant is designed, with its large overhead door and semi-circular entrance and exit, for contractors to bring trucks by and load metal products for their jobsites. Central also has its own tractor-trailer line for hauling larger quantities of metal to its distributors or to very large sites.

Product prices vary by style, but many jobs can be done and ready for pickup in a matter of hours. Most are ready by the next business day after a customer places an order.

Also, before loads go out, they are weighed to be sure enough product is provided for the job.

“We know it’s frustrating to be up on a roof, and find out you’re one piece short,” Dotson said. 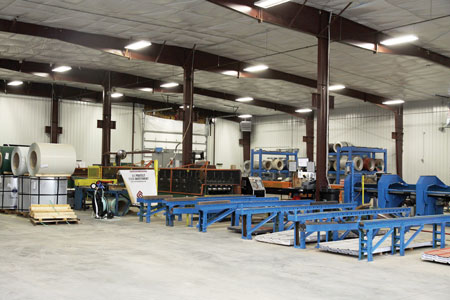 Ramsey noted the extent to which the company has invested to cut back on mistakes. Central’s computer system is programmed with orders for a given production period, and the system sends emails and texts to Ramsey’s phone if an incorrect product is being made in the allotted time frame.

The actual manufacturing process begins with metal rolls, metal rolls come from multiple suppliers and weigh an average of about five tons. If laid out flat, each roll is about 5,300 feet long—a hair over a mile, and enough—depending on structure size—to provide metal roofing and siding for five houses and three barns. The metal comes in 22 colors, all painted by Valspar ® (valsparpaint.com) to assure batch and color uniformity.

Central puts its products through 520 quality control steps, each including some by-hand work. The company has distributed a T-shirt noting that Central workers had moved 37.7 million pounds of steel in a 31-day period. As Dotson noted, that’s enough to build the Eiffel Tower of Paris twice, and its base once.

To ensure production accuracy, each manufacturing step is bar-coded, so the status of the product is known to all involved. One long machine forms the different styles of metal, with shaping changed by changing dies and rollers in the machine. Another is a larger version of a metal brake that homeowners might see their local contractor using to make metal trim for their home. The large brake, operated by two workers, precision-bends the metal as gutters or corner trim, for examples, are made. And custom sizes aren’t a problem.

“If you can dream it, we can get it bent for you,” Ramsey said.

To protect the metal from scratches or dings, plastic is added at many steps. The finished stacked products are run though a circulating plastic wrapper to assure safety in shipping.

The plant operates in a single but staggered day shift, from 7 a.m. to 6 p.m. weekdays. Office hours are 8 a.m. to 5 p.m. Links to the Scottsville plant on the company’s website,www.centralstatesmfg.com will soon be active. The local phone number is (270) 618-2763.