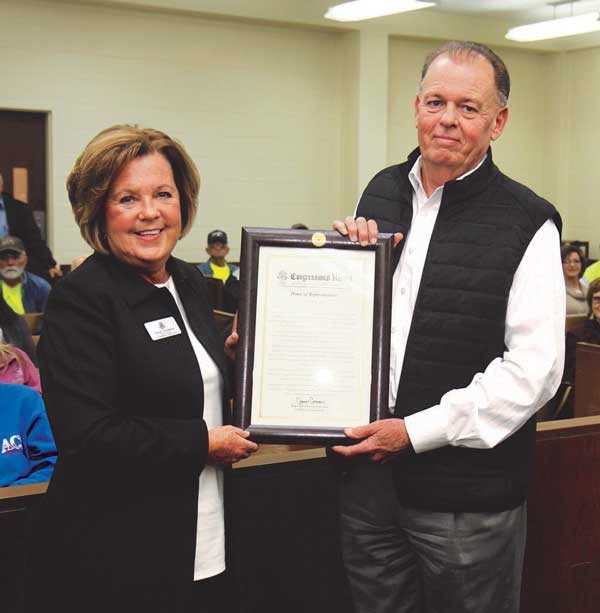 The Citizen-Times December 13, 2018 By Matt Pedigo

Outgoing Allen Judge/Executive Johnny Hobdy will continue serving the county in a different role after he leaves office December 31.

He has been chosen to lead Allen County-Scottsville Industrial Development Authority as Executive Director, effective January 2, 2019.

Current IDA Director Richie Sanders will continue to work with the IDA as a consultant and said he looks forward to working in that capacity.

Sanders said he is “proud to have been involved in the creation of the first Industrial Park in Allen County. I believe this Industrial Park is in one of the best locations in the southern United States.”

During Sanders’ tenure over $145,000,000 of private funds have been invested in the community. The IDA has undergone many changes under Sanders’ leadership over the last 10 years. In December 2008 when Sanders—Allen County’s former state senator—the total assets of the IDA were $200,000. Today, they are over $4,279,955. The unemployment rate in Allen County in 2009 was 15.3 percent; it is currently is down to 3.2 percent.

“Johnny Hobdy knows the community well and has been involved in all of the major decisions made by the IDA,” sanders adds. “It has been a pleasure working with him in the past and I look forward to a continued relationship with him in his new role as Executive Director of the IDA.”

Hobdy was a natural fit for the position, said IDA Board Chairman Jordan Clarke.

“This is an exciting time for the Allen County-Scottsville IDA,” Clarke said. “Richie has positioned us well in many ways to grow and prosper for the benefit of our community. With Johnny’s knowledge of the organization, his passion to help growth and his zeal for action, he is uniquely qualified to lead us.”

Hobdy graduated from the University of Kentucky with a Bachelor Degree in Business Administration. He gained connections and experience in state government working for former Kentucky Gov. Wallace Wilkinson (D) before winning his 1998 Judge/Executive campaign.

Hobdy is a licensed real estate agent and apprentice auctioneer. He and his wife, Deborah, have two children and eight grandchildren. Hobdy (D) did not seek re-election this year, and District One Magistrate and Judge/Executive Pro-Tem Dennis Harper (R) has been elected as the county’s next Judge/Executive.