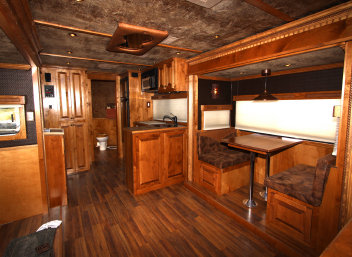 Custom woodwork, floor to ceiling. Tile counter tops. Big-screen TV, with DVD players and more. A gas fireplace. Custom rodeo-style decorations, made of wood and cowhide.
If this sound like a fancy Texas ranch’s guest house, it’s not. It’s actually the front end of a custom horse trailer, renovated and fully-outfitted by one of Scottsville’s up-and-coming businesses: Kowboy Kastles.

In addition to its custom travel trailers, the business also refurbishes tour busses. Kowboy Kastles isn’t new, but contacting the Allen County Industrial Development Authority has helped it expand its horizons with its new location, the former Superior Tire building across from Allen County-Scottsville High School.

Paul Hutcherson and wife Joyce, both natives of Cheatham County, Tenn., had moved to Allen County near Fountain Run in 1994. Paul traveled extensively and gained a lot of carpentry skills as he was contracted to remodel hotels. He still does an occasional hotel remodeling job, but that’s been less and less necessary as Kowboy Kastles has begun to take off.

“Paul was travelling all over the country, and wanted to make the step to do this here, full-time,” said Allen County Economic Development Director Richie Sanders.
It began about six years ago. Paul and Joyce raise barrel-racing horses, and often travel to competitions. Like many people involved in the sport, they used the front portion of a horse trailer to live in while on the road.

“We had a trailer we wanted done, and I decided to do it myself,” Paul recalls. “Everything went from there.”

The project turned out well, and as friends saw how it turned out, they began to offer the Hutchersons more projects, Paul recalls. In time, Kowboy Kastles continued to gain work through word-of-mouth.

They say their own experience with horse shows and other equine events has helped them to know what their customers need for road trips, and design their work accordingly.

Joyce ads decorations she makes, like the wrangler-themed cowhide and wood wall decor. “We try to do something special, over what the client asks for—that special touch,” she said.

Until recently, the business operated at the couple’s County Line Road home and its 40-foot by 60-foot barn—a cramped place to work, considering that the trailers, sometimes quite large, were also inside. A new facility was needed, and soon. 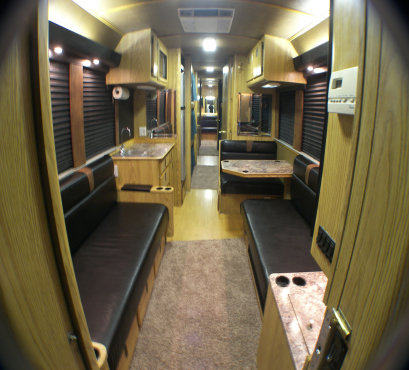 Paul said local electrician Jeff Young, who did wiring work on Kowboy Kastles projects, introduced him to Sanders. Among the IDA office’s services is working with small business entreprenuers interested in expansion and job growth to get them the resources they need.

Sanders introduced the Hutchersons to Gail Furrow, who had purchased the 20,000-sqaure-foot building after Superior Tire had closed. Sanders said he arranged for state officials to meet with the Hutchersons for possible state incentives they might qualify for. These hinge on job growth. Kowboy Kastles currently employs four people, and plans to expand its workforce to 10.

Though unable to reach an arrangement with state programs, Sanders worked with the Hutchersons to find them local bank financing for the move.

Last November, Kowboy Kastles moved into its new home, leased from Furrow. As Sanders noted, the location is very visible, and provides quick access to Interstate 65 via the new US 231. That, along with Kowboy Kastles’ work on a horse trailer that had been badly damaged in the Nashville flood, soon led to something else. Through a contract with California-based Gaines Motor Coaches, overseen through local Gaines representative Kyle Carnahan, Kowboy Kastles is also refurbishing entertainers’ tour busses.

Carnahan said Gaines—which has handled celebrity transportation and logistical services for acts ranging from Kelly Clarkson to The Doors—is considering the region, given its proximity to Nashville and its large number of musicians and entertainers. It is also working on an ABC reality TV show of celebrity life on the road.

Whether it’s trailers or busses, Kowboy Kastles handles the work on-site. The business has its own woodworking shop to make walls and cabinetry, and will soon add a paint booth. Whatever a client wants, chances are they can do it.

“In one trailer, the lady wanted it to look like her house,” Joyce recalls. “We did the cabinets to match her home.”

Paul said Kowboy Kastles is open from 9 a.m. to 5 p.m. weekdays, and its phone number is (270) 622-5665. An internet site hasn’t been established yet, but is planned, Paul said.
While Kowboy Kastles isn’t huge, its existence contributes solidly to the local economy, Sanders noted. The business buys its hardware and supplies locally, utilizes local vendors and has specialty products made by local suppliers. An example is decorative chromed, diamond-plate steel battery boxes made by Trammel Creek Cycle Works.

“The tour bus company has talked to us about working a deal for their drivers to stay at our local hotels,” Sanders noted.

Sanders said the IDA’s mission isn’t only about industrial recruitment. It’s also intended to aid smaller businesses, which collectively employ more than half of America’s workforce. He invites small business owners and entrepreneurs to learn more about IDA services by visiting the organization’s website, scottsvillegrowth.com.

“We try to put people together, and hopefully make things work for them,” Sanders said.