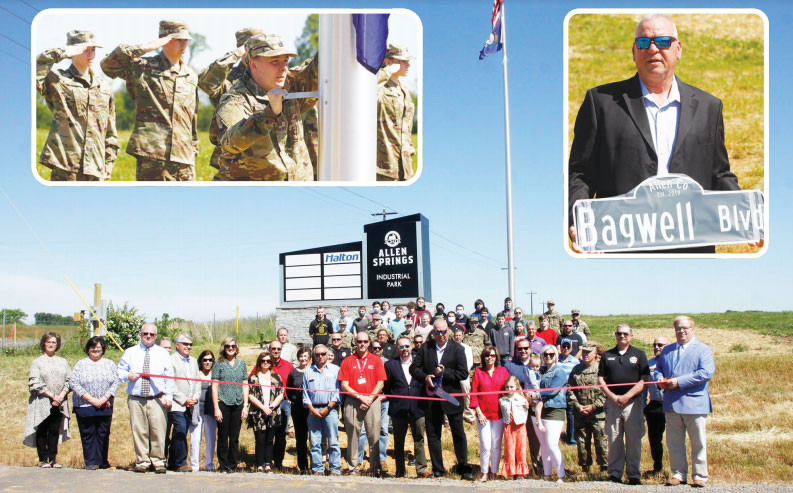 For more than a year, the Allen County-Scottsville Industrial Development Authority (IDA) has been building an access road into its Allen Springs Industrial Park, located along Veterans Memorial Highway (U.S. 231) just south of the Warren County border.
The 1,300-feet of roadway leads into the remaining 80 usable acres of the park, which, for Allen County, is flat and ready for industrial/large commercial development.
As IDA Director Johnny Hobdy noted, a plan for installation of park infrastructure—natural gas, water and sewer service as well as power and lighting—is being finished, and installation work could begin within 30 to 60 days. Right now, no major fish are on the hook, but the pond is being readied for stocking.
So, what should the road be named?
Friday morning, citizens, business leaders, public officials and Scottsville-Allen County Chamber of Commerce members gathered at the Park’s access road entrance in a ceremony meant to answer that question.
“It took about 60 seconds for our board to come up with a name for the road,” Hobdy said.
The Halton Company, Hobdy said, has long “been a staple to our community.” The company, an industry leader in the design and manufacturing of air filtration and ventilation equipment mainly for the restaurant sector, has also developed new products right here in Scottsville, like its portable, plug-in Sentinel units for ultraviolet air purification—a seller in the age of COVID-19.
In addition to the Old Gallatin Road Halton plant—a site that also hosts the Finnish-born company’s North American headquarters—the new Halton plant is also the first tenant in Allen Springs Park, from which the company purchased 20 of the park’s original 130 acres.
That has all occurred under the leadership of Halton Americas President Rick Bagwell, who has also served on the IDA board as well as the Allen County Board of Education.
Last Friday, IDA board member Rickie Huntsman unveiled the sign for the new road’s name: Bagwell Boulevard.
Bagwell was quick to say that the road dedication is a not a legacy to him, but to a community that worked together to make things happen and prepare a job base for current and future generations.
“This is a legacy for the community,” he said. “The cooperation between the city, county and IDA made this happen.”
Bagwell noted the work of Hobdy’s administration when he was judge/executive, as well as the administration of Hobdy’s elected successor, Dennis Harper, and the Allen Fiscal Court. On the City of Scottsville’s side, he praised the work of former Mayor Rob Cline and his appointed, then elected, successor, David Burch and the Scottsville City Council, which undertook the annexation of land along 231 as well as the laying of sewer and gas lines to supply the park and the corridor for future development.
Yet, Halton had a big role in that success as well, beyond its new plant being the first Allen Springs industrial tenant. The company had earlier purchased all of the remaining land in the city’s Industrial Drive park where the first Halton plant was located—a move meant for possible future expansions. That came true in part as Halton brought its North American headquarters and research/development facility to Scottsville.
However there were several acres of land left over, and Halton donated back the remaining land to the city/county, for use by the IDA to recruit more industry, or help retain existing industries. The land turned out to serve the latter purpose—The IDA built a speculation or “spec” building there, occupied by Scottsville’s Sumitomo Electric Wiring Systems for use as a warehousing facility.
Halton has also donated generously to community non-profit causes, like South Central Kentucky Crime Stoppers and helping to build the permanent endowment for the Laura Turner Dugas Fund for Allen County, to name two examples.
“A good company gives back to the community,” Bagwell said. “I’m proud of our company’s leadership at Halton—the foresight they have, and the giving heart they have.”