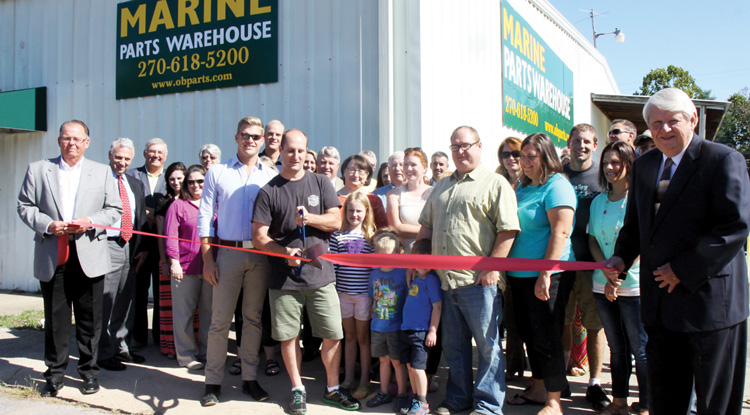 Through a partnership between the Allen County-Scottsville Industrial Development Authority and a thriving local marine parts seller, Scottsville’s former Apeks Apparel factory building is trying something new on for size.

In April, Marine Parts Warehouse, formerly located at 4488 Old Glasgow Road near the US-31-E intersection, moved into the 28,000-square-foot building at 120 Cartertown Road, in front of Woodstock Mills. On Tuesday, IDA and city and county officials as well as members of the Scottsville-Allen County Chamber of Commerce celebrated the project with a ribbon-cutting ceremony.

The family business provides new, used and reconditioned parts to primarily serve the outboard power boat market. From propellers to stern drives and engine parts, chances are they have it—or can get it—for fishing, pontoon and pleasure boats from the 1960s forward. (They don’t have much for sailboats, unless they are equipped with a backup outboard).  Marine Parts Warehouse (obparts.com) is primarily internet sales-based, but also welcomes walk-in customers at the store, open 9 a.m. to 4 p.m. weekdays. The local phone number is (270) 618-5200.

Marine Parts Warehouse is co-owned by the Whiteside brothers, Chris and Brian, who grew up around the trade. Their parents, Jim and Donna Whiteside, had bought a boat for their honeymoon, and were hooked. They made the marine business a big part of their 43-year marriage, serving boat owners in Maine and Tampa, Fla., as the brothers grew up.

“Chris got all the mechanical skills,” Brian says, adding that his brother is also certified in Johnson and Evinrude outboard motor service.  “He can fix anything. He’s a genius mechanic.”

Brian would soon add his own talents to the business; while still in college at Western Kentucky University, he started its website, obparts.com. This was around 2000, about the time the Whiteside family moved to Indiana from Tampa. Brian ran the website from WKU, and forwarded orders to the family’s Indiana facility for shipping.

In years to come, the family would start a facility near downtown Bowling Green.  However, they quickly outgrew that, prompting the move to the Old Glasgow Road facility. They found Allen County’s business climate to be friendly, Brian said. Plus, they were much nearer to Barren River Lake.

“Allen County’s been good to us,” he said, adding that Jim and Donna have now moved to this area as well; Jim now works with his sons.

So has the trade—Marine Parts Warehouse soon outgrew that 5,000 square foot building as well, prompting a search for a new location.

“We’ve seen increased sales every year since 2000,” Brian noted. Marine Parts Warehouse sells via its website, its own eBay store and walk-in customers. The business posted $1.2 million in overall sales last year—a 41-percent increase over the previous year—and projects $1.4 million for this calendar year. About five percent of its sales are international. It has been successful enough to allow Brian and Chris to work regular hours and enjoy their families, and for their wives to stay with their children.

The search for a new location at first was conducted word-of-mouth—and it came full-circle. The Whitesides asked a friend, Allen County Schools Director of Grounds and Maintenance Clark Towery, who put them in touch with Community Planner Gary Mathis. He, in turn, suggested asking IDA Chairman Jordan Clarke—who, as the owner of Wooten Insurance, was already the Whitesides’ insurance provider.

The IDA’s involvement has been a big plus, Brian says. The organization made or is helping to make several improvements to the property, like new parking lot pavement and a front retaining wall, as part of its sale to Marine Parts warehouse.

“The IDA has done a lot to help us, and we’re very grateful,” Brian said.

“If we hadn’t been able to find the right facility, they were looking to leave the community,” Sanders said. “They’d outgrown their current location.”

Sanders added that the local success of Marine Parts Warehouse was also an example of how North Central Telephone Cooperative’s work to install high-capacity fiber-optic internet service throughout the city of Scottsville and most of the county has helped business and industry. With this heavily web-based business, the fiber network was an attractive incentive to stay, Sanders noted.

In addition, he said, Tri-County Electric Membership Corporation had been helpful in cutting back service to the building, as Marine Parts Warehouse didn’t need as much voltage as Apeks or a metal polishing business that had been there temporarily afterward.

“And by having a building available, we were able to accommodate industry,” Sanders said. “Having property available is a big thing in trying to keep what we’ve got and recruit new industry.”

Other dignitaries welcomed the Whitesides and their business, starting with Chamber Executive Director Jamie Boler.

“It’s always awesome when we can celebrate business expansion,” he said.

State Rep. Wilson Stone (D-22nd District) offered his services in dealing with state government initiatives, saying he’d like to see the business “outgrow even this building.”

“It’s a good problem to have when a company has been tried, tested and needs a new facility,” Allen Judge/Executive Johnny Hobdy said. “We’re thankful to be a small part of moving you forward.”

“It’s been a while since I’ve been in this building, and I want to compliment you on what I see here,” Scottsville Mayor Rob Cline told the Whitesides.  “We’re thrilled to death that this business is here. It’s a wonderful business, and I thank you all for being a part of our community.”

“It’s been gratifying to see the growth they’ve had,” IDA Chairman Clarke added. “We were glad to help. It’s a great place, and I can see a lot of growth coming from this.”