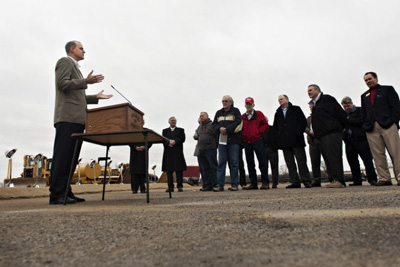 With the groundbreaking Friday for a new building in Allen County, Sumitomo Electrical Wiring Systems will have a bigger place in the county’s economic landscape.

The company will occupy a $2.5 million warehouse, which will be owned by the Allen County-Scottsville Industrial Development Authority and leased to Sumitomo. (Pictured is Jordan Clarke, Board Chairman speaking during the Ground Breaking Ceremony)

While no new jobs are expected immediately, it could mean some in the long term. Sumitomo currently employs 194 people in Scottsville, with an annual payroll of $7.6 million.

Matt Adams, general manager of general affairs at Sumitomo, said the facility will allow the company to move warehousing out of its other two facilities, freeing up floor space for expanded manufacturing needed because automotive industry business has continued to increase since diving in 2009. The new building will be used to receive raw materials, house finished goods and then to facilitate shipping, he said.

“This will allow us to operate more efficiently,” Adams said.

And it will allow the company to service both new customers and expand what it does for existing customers, he said.

“Wow, all of this for a warehouse,” Adams said. “But this means a whole lot more to us.”

Rep. Wilson Stone, D-Scottsville, said the groundbreaking is a symbol of the cooperation between governments and the county’s industrial board and others.

Richie Sanders, director of the industrial board, said the project would not have happened were it not for a Halton Co. donation. That company donated about 18 acres to the board to use for future development.

Halton, which makes kitchen ventilation systems, had purchased the property to build a research and development center adjacent to its manufacturing plant. Sanders said the land was divided into two parcels so it could house another industry.

Sumitomo left communities such as Morgantown when trade agreements made it cheaper to complete manufacturing in other countries.

The Scottsville plant makes the plastic connectors for wiring harnesses. When it first began, the company supplied mostly Japanese original equipment manufacturers for the auto industry, but now it supplies parts for all U.S. OEMs.

The industrial authority is obtaining its construction loan from Edmonton State Bank for which the city of Scottsville will co-sign the loan. Once construction is finished, the group will get permanent financing with the help of Tennessee Valley Authority and will apply for a federal loan, Sanders said.

The authority will do a five-year lease for the building, which Sumitomo will spend an initial $250,000 to equip.

Scott, Murphy & Daniel of Bowling Green will be the construction manager for the 48,000-square-foot facility at 120 Industrial Drive.

Adams said they expect to occupy the building, which is expandable by about 30,000 square feet, by the fall.

“But it really means a lot when an existing company has the confidence to expand here,” Hobdy said.

Sanders believes that is in part due to the work ethic of the county’s work force.

“They have a fix it mentality, likely because a lot of them have agriculture backgrounds,” he said.