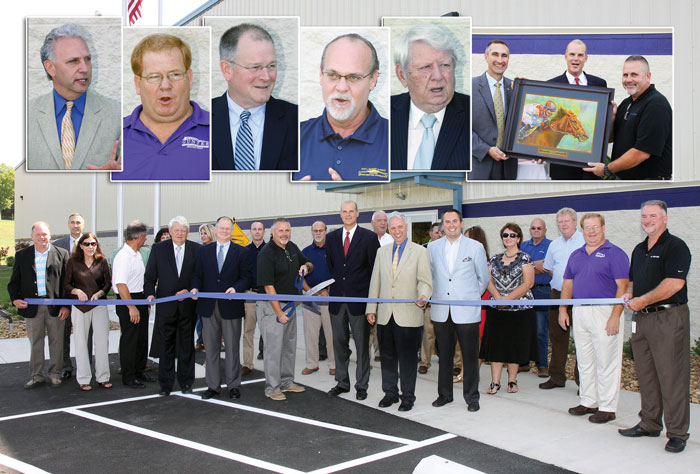 One aspect of what the Allen County-Scottsville Industrial Development Authority (IDA) does—helping keep existing major employers happy with where they are—celebrated a milestone last Thursday.

The $2.5 million, 48,000 square-foot industrial building had begun as a speculation, or “spec” building built to recruit industrial location or existing-industry expansion. Last October—well before the building’s official ground-breaking ceremony this past January—SEWS announced that it had already secured use of the structure, in a five-year lease agreement with the IDA.

SEWS is a leading manufacturer of electrical components for automotive applications. Its two Scottsville facilities—one on Old Gallatin Road and a now-reopened plant on Smiths Grove Road—make wiring harness terminals and components. SEWS General Manager of General Affairs Matt Adams noted that the new building will provide storage, both for raw materials ready for use and for finished products ready for shipping. Having that storage and staging area in a third facility will help make both Scottsville SEWS plants much more efficient, Adams said.

The company has seen a major rebound as a consequence of an also-rebounding automotive industry, Adams noted.

“We expect that growth to continue,” he said.

For now, the project hasn’t resulted in a net gain in jobs; SEWS has simply transferred existing employees to the new facility. However, Adams said, growth in the industry is expected to help SEWS add jobs there or in other Scottsville facilities, possibly soon. SEWS currently employs 278 Scottsville residents.

Its construction was made possible by several factors, beginning with a major donation. Early in 2013, Halton publicly announced that it was donating back all the land it had purchased in the roughly 18-acre industrial park. (The company had at one point eyed expansion and possibly headquarters here.) The move made the SEWS project possible; in his speech, Allen County Economic Development Director Richie Sanders thanked Halton for it.

“This shows what happens when we have people working together to make good things happen,” he said.

The project was also established through a partnership between the IDA, both local governments, the Tennessee Valley Authority and with major financing provided by Edmonton State Bank. The project’s master contractor was Bowling Green-based Scott, Murphy & Daniel, LLC.

“This helped leverage other investment in this project,” Sanders noted.

Cline and Harper also thanked the efforts of all involved, as did SEWS Corporate Purchasing Manager Barry Brown.  Daniels said the project had been a welcome one for its Scottsville employees, who, for the project’s duration, had been able to work close to home.

With the SEWS spec building project complete, the IDA is currently looking for new sites. Land with utility and major-highway access is needed. Allen County is well-positioned for recruiting new industries or large commercial ventures, but gaining sites will be key in that pursuit, Halton America President Bagwell said as he surveyed the project that his company had freely given the land for.

“It was the biggest play we could make,” Bagwell said of the donation.

Bagwell, who now serves as a non-voting advisory board member for the IDA, stressed the need for land and potential sites.

“Right now, southcentral Kentucky is the hottest area of the state (for industrial/large commercial recruitment),” he said. “Strategically, we have to make a decision on whether we want to compete—if we want to be a place for homes and suburbs, or whether we want to build up this community with jobs. That hinges on land.”